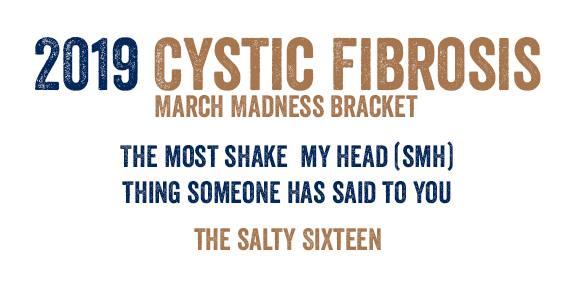 The Salty Sixteen is here! I can’t say the same for two of our #1 seeds. That’s right, Have you tried essential oils? and Will she grow out of it? were sent packing after only the second round! We had two tight matches last round, too! Have you tried cutting dairy from your diet? lost by 20 votes to Have you tried those new CF drugs? in a contest with close to 600 votes cast. You’re always sick! also won a close one, slipping by I knew someone with CF, they died with a spread of only 34 votes.

Time to get your votes in for the Salty Sixteen over on @SaltyCysters, @Breathe_in_pod, or below! I Was the Victim of a Catastrophic Feeding Tube Failure