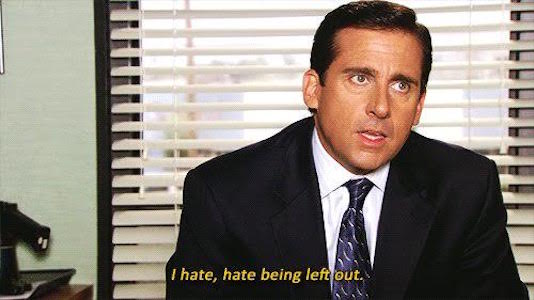 Full disclosure here; I’m writing this while doing my treatments. In fact, I just stuck a syringe into a vial of sterile water, drew some out and then injected it into vial containing powdered medicine. Chemistry.

I was snowed in last Thursday, so I found myself involved in a live Twitter Q&A with the Dana-Farber Cancer Center’s Young Adult Program. The Internet works in mysterious ways, I guess.

The Topic was about FOMO, or the fear of missing out, during cancer treatments.

Share how you dealt with “fear of missing out” (FOMO) during treatment next Thurs, 2/9, 1pm ET during our #YAPchat. #ayacsm

Now obviously cystic fibrosis and cancer are on different ends of the medical spectrum, but I certainly do think there are many parallels when it comes to the treatment regimen and the overall emotional burden placed upon patients.

Further, I wanted to see what cancer patients, former and present, as well as caregivers thought about the levels of FOMO in people with chronic illness vs. people who have had their illness resolved relatively quickly:

@DanaFarberYAP Im a cystic fibrosis advocate. Do you see a difference in FOMO when there is prolonged illness vs. quick resolution? #YAPChat

And here are some of the answers… Illness is especially isolating for people who are exposed to independence and then ultimately find themselves faced with a mountain of adversity.

The reason I asked my question was that generally speaking, people with CF live in relatively good health until a certain event (or events) starts a downward spiral. That point in a CF patient’s life, can be the result of a number of things. For me, there have been a few situations that have caused a decline: Mono in 2008, Pancreatitis in 2010 and two different cases of pneumonia in 2012 and 2013.

Needless to say there was a five-year period there that was pretty tough. I don’t think it is a coincidence that it encompassed my college years.

In a lot of ways I’m still paying for it.

I live at home with my parents, 45 minutes away from where most of my friends live, simply because I need a first responder should something go wrong (which has proven to be a good choice); I spend hours each day doing treatments; I rack up 10-12 weeks each year attached to an IV drip; and, ultimately, I sometimes find myself without the feeling of freedom that I enjoyed during college.

But do I feel FOMO?

I have two answers.

Looking at it through the lens of someone with cystic fibrosis, I’m not sure that’s what I would call it. Rather, I think I have adapted my life and lifestyle choices in such a way that allows me to both succeed and function at an appropriate level given my health.

I’ve had to sacrifice a lot, while also living a life I would never trade for another.

I have looked through the same kitchen window each morning for the past 18 years and have seen the world change.

The biggest thing that I have missed out on since college is the overall freedom of my 20’s. I’m certainly fortunate enough to have parents who will forever do what they can to help provide for me, but at the same time I’ve seen my friends push themselves and succeed on their own in ways that, for now, I can only imagine. And, for the record, I could not be happier for all of them.

It doesn’t make me sad or frustrated that I’ve had to take a back seat to all of this, since realistically, I’ve also made worked very hard to maintain a high level of productivity through the tremendous expectations I set for myself. I’ve also been able to create amazing memories for myself on my own terms.

I simply lack the consistent freedom I once had, and some of it, I admit, is by choice.

Beyond that though, the Twitter Q&A brought something to my attention that I’ve never really considered:

What role has social media played in your FOMO? Has it made it better, or worse? #YAPchat

Social media, I think, plays an enormous role in many of our lives. I know it certainly plays a big role in mine. I essentially push my brand through social media, so I’m constantly logged in (Twitter: @G17Esiason, Instagram @esiason17g).

I think it has created many wonderful things, like generating online cystic fibrosis communities where patients, family members and caregivers can share experiences and argue with each other (because what good is a comment section without a disagreement) **eyeroll**.

The negative consequences of social media, though, are hard to ignore. We’ve all essentially built our own virtual profile to shape our lives in the way that we all would like to be seen. We share the highlights of our lives in the hope that someone out there is listening. We stick pictures from Tiffany’s 26th birthday and all the champagne showers that happened that night in all of our “friends’” faces, most of whom weren’t even there, or let alone know who Tiffany is. We share marriage and pregnancy announcements, pictures of our new cars or apartments. We complain about politics, fawn over people we don’t know (and probably never will) and try to answer some of the deepest theoretical problems facing the world.

Because it makes all of us feel important.

I think we are all entitled to feel that way, and believe me, I’m certainly guilty of all this…

…yet I’m sitting here sucking down medicated mist and feeling like I’m looking at half the picture.

I also think that the feeling of FOMO is precipitated by the evolving use of social sharing.

When I see all those things listed above on Snapchat, or whatever medium, I stop and think, “why must everything be shared?”

Should I really feel FOMO because I missed so-and-so’s birthday party or a graduation party because I could hardly walk up and down a flight of stairs?

Yes, because that’s part of growing up.

There are 9 million ways to entertain myself when I’m not feeling well, but I would be lying to you if I said that I don’t feel a hint of FOMO when I see an Insta video from a friend’s night out. It’s like I’m watching someone else in my place when I very well could be apart of it, yet I’m strapped to my Vest for the third time of the day looking out the same window I’ve been behind for 18 years.

People shouldn’t stop sharing their lives on social media because it’s an amazing outlet for people (example: my blog. Is someone out there listening?), but I do think people who happen to be isolated, because of an illness or whatever, need to tread carefully. I’ve learned when and when not to limit my social exposure to the Internet, and I know when and when not to share something.

Ultimately, I’ve figured out how not to give a shit about what people think of my virtual personality. If you want to get to know me, read something I’ve written here, or pick up the phone and say, “Hello,” because that’s what I’ll do if I want to get to know you.


Making it Matter Ep. #26 – How Chronic Illness May Limit a Vacation

Making it Matter Ep. #27 – Can Drug Development be a Stress Point?