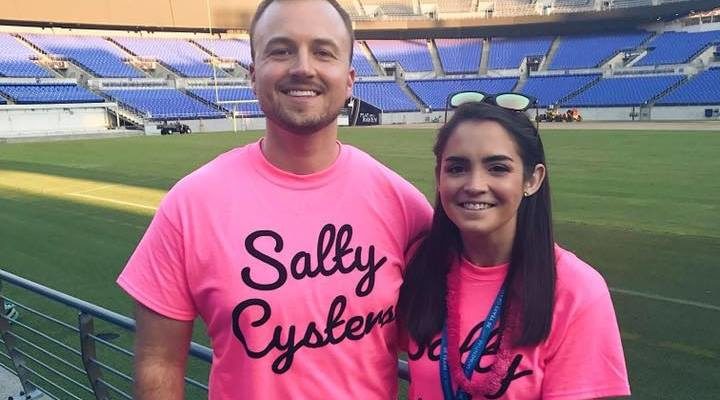 Today we have a very special guest post from Paul Widmeyer, boyfriend of the late Lea Faraone.

This concern stems from the guilt she faced over CF’s impact on those she loved.  Since getting to know the broader CF community, I’ve come to learn that this same feeling of guilt is shared by many.

It wasn’t very long into our relationship when I began to sense and understand the guilt brought on by the presence of cystic fibrosis in her life.  Lea made a statement in episode 42 of Breathe In that was made offhand and in passing, but I know it came from a deep and troubled place in her heart.  She said, “I’m upset about how [disease progression] will affect my family, my parents, my sister, my boyfriend, and my friends.  That’s what I care about more than how it personally affects me because at the end of the day, I can deal with anything.”  This statement speaks volumes to her selfless, caring nature and sheds light on her struggle.

Lea’s guilt was rooted in her perception of how her life inconvenienced the ones she loved, and her perception of how much pain that losing her would inflict on those she loved the most.  She didn’t know a life free of CF, or what it’s like to be in a relationship where CF didn’t play a role.  For her, understandably so, it was nearly impossible to see past the role this horrible disease played in relationships, and not experience some level of guilt.

As I found through our relationship, our perceptions could not have been more different.  Changes of plans, or going about things a little differently, were all so incredibly worthwhile and trivial to me.  To me, there are so many other qualities in people that are truly inconvenient, worthless, and unappealing that the presence of CF only made me love and value Lea further.

The type of events that perpetuated Lea’s guilt, in my eyes, were moments of significant growth which allowed our relationship to develop into something truly special.  Every second we spent together while she did her treatments was time for us to escape from our busy lives and bond as a couple.  Hospital visits, and rounds upon rounds of at home IVs quickly revealed each other’s vulnerabilities and true colors. Helping her by carrying her bags, letting her have the window seat on plane rides, and making small accommodations to make life a little easier was the simplest way to show how much I loved her.  Taking life a little slower sometimes, skipping out on some partying, and walking more slowly so I wouldn’t wear her out allowed us to spend more time together, which is ultimately what we both enjoyed the most (there’s a reason I’m referred to as “GrandPaul” in some social circles!). All of these moments were not inconveniences to me, but rather unique opportunities to show each other that we were right for each other, that we were meant to be.

There were times when she wasn’t feeling well and we had to change our plans.  Those rare occurrences devastated Lea.  No matter how much I tried comforting her and telling her that I really didn’t mind (I really didn’t!) or I didn’t want to go that much and would rather spend time with her, I knew the guilt was always there.  I know there were more instances where Lea wasn’t feeling well and pushed herself to stick to our plans because of the guilt of holding me back.  She did this to avoid or minimize the guilt that CF brought her, to make me happy, and because she feared that inconveniencing me would ultimately result in my leaving her, like others had done in the past.

For those of us who love someone with CF, the guilt will always be there.  Our job of comforting and reassuring is never finished.  We need to continually provide affirmation that our love surpasses the guilt, and that it is all worthwhile (because it is!).  The most well received and truthful sentiment that I shared with Lea in times of struggle was to tell her, “You ARE worth it.”

And, finally, to Lea:

If I could go back and do it all over again knowing the outcome, would I? Yes, a thousand times over.

Losing you has been the single most difficult experience of my life, but it pales in comparison to the truly life changing relationship we shared.  The privilege of loving you far outweighs the sorrow in coping with your death. You showed me what true strength and resilience looks like.  You taught me what it means to fight and what it means to love like tomorrow isn’t guaranteed.  For me, I will carry on and move forward as I know you would want.  Your memory will be with me forever, and I will strive to emulate your amazing qualities and share your legacy.  The love we shared has made me a better person in every way.

I will overcome…because it is you who taught me how.


Breathe In Ep. #79 – Straight From the Lungs, Priceless Breaths