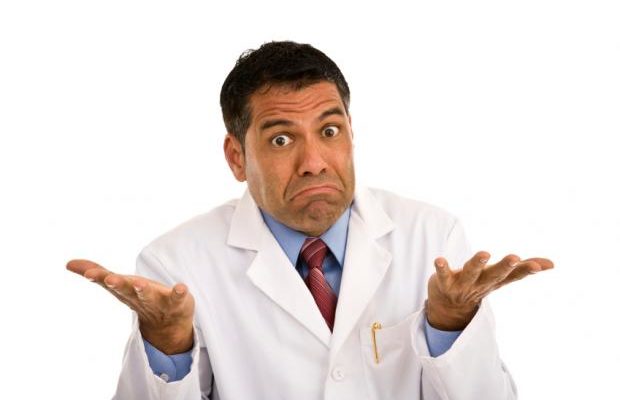 Cystic fibrosis doesn’t make me immune to other ailments or injuries. Shit happens, we get sick, we get hurt… it’s life, and a lot of the time it’s unrelated to CF.

The way we treat those issues, though, can relate to CF.

Cystic fibrosis is very complex. Our condition is a mix of infectious disease, genetics and malnutrition with a little autoimmune disease (usually our white blood cells do more harm than good if you didn’t know!) on the side. CF has a lot of moving parts, I’ll give you that much. It’d be unrealistic to think that every single person who goes to medical school comes out on the other end as an expert in all these areas.

It shouldn’t be a shock that some of the best pulmonologists in the world choose to specialize in cystic fibrosis care. They are very good at what they do.

Sometimes, though, we run into doctors who have only the most basic understanding of CF, and when they try to treat us for whatever they specialize in, it can create conflicts within our normal care routine…. or it can seem like they have no idea what they’re talking about.

If you’ve been living with cystic fibrosis, or really any chronic illness, long enough, you start to feel like you could be a doctor… or at least you’ve picked up enough skills to know how to treat a whole number of complex things.

I’m not talking about self-treating, or saying that I could get in there and fix up someone’s cancer diagnosis.

I’m saying that older people with CF, or whatever other condition, become legitimate experts over time.

I talked about that a few weeks ago when it comes to placing a value on our expertise, but sometimes that expertise is also practical.

We know the in’s and out’s of different antibiotics, procedures, wound care, vitals, test values, rest vs. activity, and a whole number of other things that happen inside and around the human body.

Generally speaking, a lot of us can take care of ourselves. We work with our CF care teams.

So when we come across run of the mill MD’s, or doctors who deal with a number of normals (as I like to say), I think all of a sudden we get a weird clash between extremely well educated patients and doctors who are not accustomed to working with empowered patients.

I think that’s why we saw Doctors and Nurses unrelated to CF make such good runs in the Cystic Fibrosis March Madness Bracket.

I think we get the perception that they are talking down to us, or dumbing things down when we’re well versed in discussing really complex things.

I’ve wanted to write about this because of what we’ve been seeing with the CF March Madness voting.

Not long ago I found myself in this very spot. With the end of hockey season, I was dealing with a little hockey related boo-boo. As it turns out, hockey, and not CF, may be my downfall. This was the second time in about a year that I’ve had a hockey issue.

So I went to the doctor and well… as soon as I saw the little form they make you fill out… especially the part that says, “List your medications below and the reason you’re taking them,” I knew we were in for a trip. Undoubtedly there’s always only a line or two available to write everything down.

This, more than just about anything else (except for a real emergency), is a reason why chronic illness patients need to keep a med list handy. Whenever I see something about medical history I always write “cystic fibrosis” as clearly as possible, knowing that it’s nearly impossible to have a non-CF doctor dissect my laundry list of medications.

I do, however, list what I deem to be the most important medications as they relate to the specific situation – a lot of times antibiotics are on the top of the list or other things that may be especially toxic. When I was in this very situation last Spring, I was dealing with an orthopedic issue, so I made it very clear that I was taking prednisone and a fluoroquinolone (antibiotic), both of which can impact sport injuries.

Ultimately this time around the doctor recommended a course of treatment that I knew could create a small conflict with my normal med routine. Nothing too significant – it was a minor dosing issue with a med that I’m already on, and I’m happy I caught it. For that reason, I like to know what medications I’m taking, why I’m taking and what they do.

There was no reason for the doctor to know the larger picture surrounding my health, especially in a consultation that lasted about 15 minutes, but when I brought up the issue I was immediately dismissed and then lectured about antibiotic resistance, inflammation and recovery. All of which are pretty much at the root of CF care. It was almost like I wasn’t allowed to be an empowered patient… it was a very new feeling for me.

Maybe I didn’t come off as knowing what I was talking about? I can usually talk pretty freely about medications and different medical scenarios, and maybe he wasn’t used to that kind of thing. I don’t know.

It wasn’t as if I didn’t appreciate his insight, I may have a lot of experience in CF, and I certainly didn’t claim to have an expertise in his field of practice, but my CF care is my number one priority – anything that may interfere with my routine needs a real solution.

Recognizing that the conversation took a strange turn, I contacted my CF care team and worked with them to come to a solution based on some of this other doctor’s recommendations. The issue was resolved in the matter of an hour or so, but the frustration left a bad taste in my mouth, and this certainly wasn’t like the situation many years ago when a clinic director on a ski mountain in Wyoming was convinced that I had Tuberculosis.

The bottom line is that I feel like a lot of people out there are going to the doctor looking for a quick fix to what seems to be a simple problem, and then they’re sent home with just that – a simple solution.

When the simple problem is in the middle of something incredibly complex, like CF, and we’re given the same simple solution as everyone else, it’s hard not to feel like the medical system is letting us down.

The sad reality that I’ve come to realize is that a lot of treatment plans of this nature – the simple solution – are someone’s best guess, and if that guess doesn’t pan out we move onto something else.

We still have that issue in CF – for example, why do some people cough up blood, while others don’t? We can guess why, but we don’t really know. For some reason, I have an easier time reconciling the fact that people don’t totally understand this CF issue because, well, CF is complex.

Meanwhile I have a much more difficult time feeling confident about going to a general doctor who could screw up a very delicate balance of medications by offering what he thinks to be a simple solution to a simple problem.

The whole thing is interconnected. Don’t ever let someone tell you that your injury or illness is completely unrelated to your CF. The common cold, a broken foot or gluten intolerance may not be happening to you because you have CF, but the way you look at it will relate to your CF.

I changed a few small details in the above anecdote… My medical history is for me, and me alone! The lessons, however, are for everyone.


Cystic Fibrosis Around the World – Sweden