The Winner of the Cystic Fibrosis March Madness Bracket – Coughing 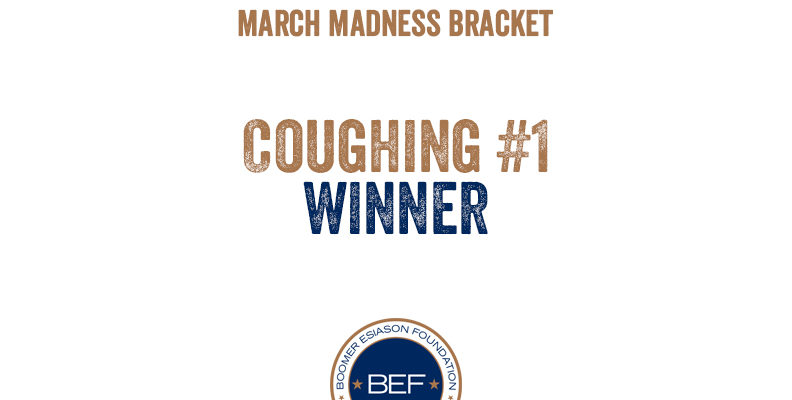 After weeks of voting, far too much sweat and a few tears, we have a winner!

Coughing is going home with the title of “the most annoying part of living with cystic fibrosis!”

Congrats to coughing for all its hard work this season. A well deserved title.

The championship was a blowout. “You Don’t Look Sick” never had a chance. We had greater than a 100 vote spread in the final round. Such a difference was quite rare as the tournament progressed, though Coughing was dominant all the way through to the end with the toughest challenge coming in the Cystic Fibrosis Four:

Pure domination. Coughing captured an average of 73.9% of the vote throughout its 6 matchups.

Coughing is, well, at the root of living with CF. I suppose not every person living with cystic fibrosis has severe respiratory disease, but the majority of us do. When you think of cystic fibrosis, you think of the heavy, wet cough. As it turns out, it’s actually quite difficult to find an average “cough count” in a single day for people living with CF. I wasn’t able to find a good, definitive study on the matter to cite here, but I’d venture to guess we’re coughing well upwards of 100-200x a day. Easily.

Just this past weekend the girlfriend actually made a comment while I was doing treatments, “why do you sometimes mumble [an expletive] after a cough?”

Without giving it a second thought I said, “well it’s just so damn annoying sometimes.”

And with that we realized that’s why coughing is the true champion of the Cystic Fibrosis March Madness Bracket.

Us patients have a weird relationship with Coughing. Though they are so goddamn annoying, our coughs are kind of there to help us, and really something we shouldn’t be worried about suppressing. I think I’ve taken a cough suppressant maybe once in my life, and it was to help stop a bleed. Even then it felt so weird going through my day without a coughing fit, not to mention how junky I felt hours later because I wasn’t able to get the mucus out.

I always say, “it’s better out than in,” and I guess that’s what coughing gives us.

So… congrats to coughing on a well deserved championship, and I hope it enjoys this One Shining Moment.

PS: Check out the Breathe In podcast from a couple weeks ago where we discussed coughing.