A Few Things I’d Tell My Freshman Self 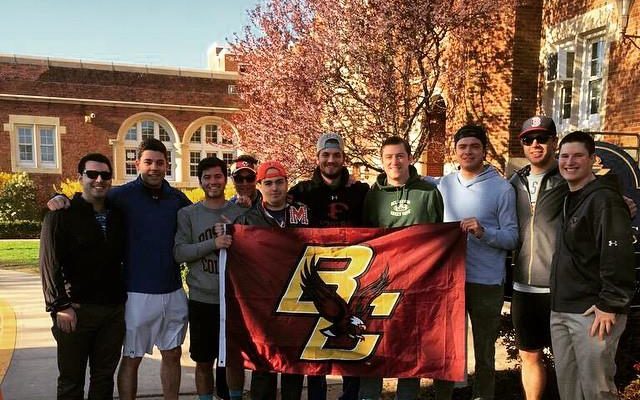 It’s that time of year when all of us old folk feel nostalgic for a moment, then carry on with our days – the rush to college is here.

College was a real turning point in my life. Cliché, I know, but I think that’s because it was such a major triumph.

At the same time, though, it was such an enormous struggle.

I set off with the goal of graduating on time (in 4 years). I accomplished that goal, but in so many ways I think I’m still paying for some of the decisions that I made during my college days

Before I went off to school at Boston College, I had never been hospitalized and other than a few bumps in the road, my health was halfway decent.

By the time I graduated, I had been hospitalized three times, suffered from pancreatitis, had a feeding tube placed and limped across the finish line at graduation after having dealt with pneumonia twice during that final year.

Needless to say there were a few growing pains. Despite some of my struggles, though, I always think that people with CF should go off to college if they can. I so very much value my degree from BC, but my memories from school are so much more important in my life.

Here is some advice for the cystic fibrosis class of 2021:

As far as I know this phrase comes from our men and women in the service, but I think it wholly applies to living with a chronic terminal illness as well. One of the most difficult moments people with CF will face when they get to college is, how do I tell all these new people about my CF? The bottom line is that we can’t run away from this, and there is no more important time in your life than your first week in college to own your CF. You are living away from home, and you’re going to need some allies. Let them into your life, it’ll go a long way in the end. You can listen to how I told my roommates about my CF on my podcast.

Learn how to talk about CF

Teach yourself how to talk about CF in a confident way. People want to help you, they just need to know how.

Be honest with your professors

95% of the time your professors will be good people. I can’t vouch for all of them since there are a few hotheads out there that feel like they are God’s gift to higher education. Despite that, you’re going to have to tell your professors that you have CF. It’s a lot easier to explain to someone that you’re getting thrown into the hospital if they already know about your CF, than it is to get them caught up if something goes wrong. If you’ve got CF, odds are you’re going to get sick, be prepared. In a lot of cases we’re covered by the Americans with Disabilities Act, and if you’re meeting with a competent advocate (LIKE YOU SHOULD BE) in the University’s administration, that person will likely tell you that you should talk to your professors on the first day of class as well. Beware, though, not all colleges need to adhere to the ADA – for some reason, unbeknownst to me, certain religious colleges are exempt, which is the dumbest shit I’ve ever heard of in my life….

I had every intention of playing club hockey when I got to BC in September 2009. Things didn’t go as planned, and I was cut from the team about two weeks into practice. Not only was it the most humbling moment of my life to that point, but I was left with this feeling of, “uh… so what do I do now?” I didn’t do anything. My fitness and exercise program totally collapsed. I sat on my ass until intramural hockey started up in the winter, by that point, the damage had been done. You may have been a big shot in high school, but you have to remember that when you get to college in the Fall, it’s a new playing field. You have to apply yourself, get involved in as many clubs and activities as you can, and make sure you stay on top of your fitness. Don’t be like me and let what little athleticism you have go to waste. When you’re a freshman… you think anything is cool

It took me about 3 years to learn that people can’t live on fried food. Don’t be like me. Make good choices in the cafeteria… and when you’re stumbling home from a party at 2:00am.

I never fully had a grasp on the number of people who smoke cigarettes until I got to college. It’s disgusting and will never be cool. You need to be cognizant of your surroundings. At first I was shy about asking my friends to move location based on a smoker’s presence, but I realized I had to take the initiative, that is until my friends started to take that responsibility from me. Building on the allies point from above – I trained my friends to be on the lookout for smokers, and a lot of the time they’re happy to move location for me, and are even very proactive about it. It shouldn’t be shocking that your friends have your best interests in mind.

Discuss hygiene with your friends/roommates

I made it abundantly clear to my roommates that they had to be vaccinated against the flu or whatever else was the hot button issue when we were at BC. I think swine flu was the big one the freshman year, then we had a Mumps outbreak during my senior. How the f*ck does that even happen? The Mumps….? Some poor kid on my hall actually had swine flu my freshman year. Horrendous. College is like a cesspool for viruses and everything else, and since college is the first time for a lot of people when they are going to be living in extreme proximity to thousands of people, it’s important to take proper precautions. We bleached the bathroom as needed, regularly did laundry, had soap and sanitizer all over the place and took the trash out when we needed to. That’s not to say our dorm wasn’t a shit hole from time to time, but we did a good job of getting on top of any disaster that came our way.

Bring your own cup I know this sounds weird, but it’s the best little thing you can do for yourself. Bring your own solo cup to parties if you plan to partake in any drinking games (what a weird way to say that). You don’t need to be sharing cups with people you don’t know – that’s how you’ll come down with a cold, or something worse. It’ll take one cold to figure that out. No college kid wants to spend money, and one way for people to save money is going small on cups. Cups are reused, and you know as well as I do, that shit isn’t getting sanitized between games of flip-cup. If you’re lucky they’ll get rinsed out with tap water. Bring your own cup, one that’s going to touch your lips and no one else’s. By the time I was a senior, just about everyone knew I was dealing with CF, so people were quick to give me a fresh cup at most parties, but when I was a lowly underclassman, bringing my own cup was a big time strategy of mine. I also never felt shame in using a side cup if we were playing beer pong. Little things like this go a long way.

You need to make health conscious decisions when choosing where to live. I did a good job in this department two of my four years, and failed miserably the other two. If you’re like me and want to be in the middle of the college experience, it’s going to be hard to resist the urge to prioritize things correctly. For example, my roommates and I had our hearts set on living in a certain dorm (tradition dictates that most students at BC live on campus 3 out of 4 years). I don’t think it was a coincidence that I suffered most sophomore year. There were 4 of us crammed into a tiny space with one bathroom between us. No matter how well we cleaned the area, the black mold, dust and grim embedded into 30-year-old building wasn’t going away. Two hospitalizations, pancreatitis and a feeding tube surgery later, I think it’s fair to say we probably should have lived elsewhere.

This is the last one, and my longest piece of advice – hopefully it’s all encompassing. Each university will have certain rules that will be tough to find, but if you do find them, you can really use them to your advantage to help even the playing field with the rest of the students. Here are a few that I came across:

That’s it for now! I’m sure I forgot something… so we’ll revisit this eventually and if you’re an older person with CF reading this, feel free to add your advice to the comments below!

To the rising freshman class of 2021, good luck, have fun and remember you can apply for scholarships through BEF at Esiason.org! Graduation will be here before you know it………………

Graduation is the worst best day of your life