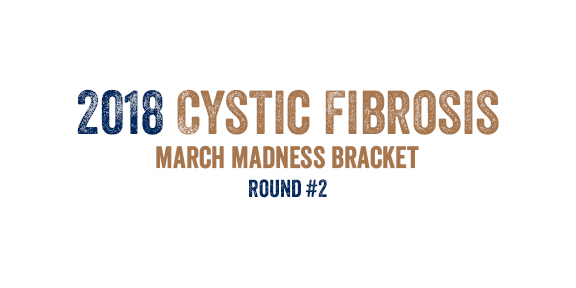 We’re starting to get into the territory where just about all of this sucks… or the vast majority of us living with CF actually deal with most of the issues within the remaining teams one way or another. For the most part, one-off issues that patients may or may not deal with have been eliminated (with a few exceptions).

I’m keeping an eye on these matchups:

Malabsorption (Diarrhea) #5 vs #13 Stomach Pain – Can you have one without the other?

Using Multiple Pharmacies #12 vs Nurses Unfamiliar with CF #4 – Will the cinderella run continue?

Inconsistent Day-to-Day Health #6 vs Lung Bleeds #3 – Another #6 – #3 matchup on the list. This one is a really, really tough choice for me.

Voting is now open! There is only ONE PAGE for this round as we have fewer games (16) to vote on – this poll should take 30 second…. maybe 45 if you have to think for a few of them. You can also head over the @SaltyCysters Instagram to cast another vote!