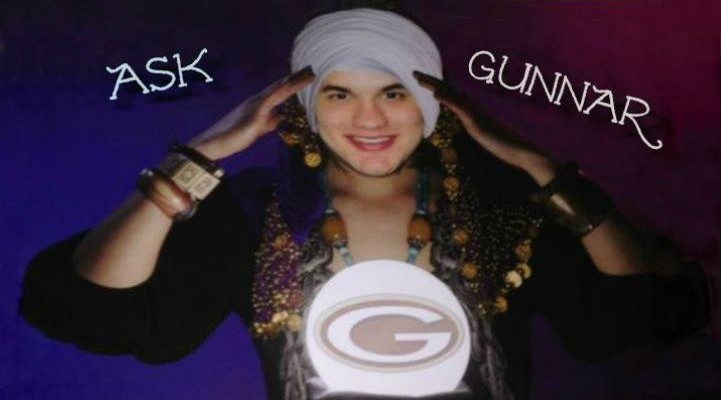 **Please be advised: do not consider anything in this blog official medical advice. Medical advice can only be given by a certified medical physician. The contributors on this blog may not be held responsible for any damage that may result from using the information in this blog without permission from a medical doctor.

I was overwhelmed with all the emails and notes I received after my last blog post about 15 things you shouldn’t say to someone with CF (http://gunnaresiason.com/dont-say-that-to-me).

It’s a pretty cool feeling to know that people are actually reading what I am putting out there, so thanks for all the feedback! The emails were all over the map. A lot of them were questions or comments about why I let people lick me from time to time. Others shared hated questions that I didn’t list in my last post. To be honest, as I was writing a few weeks ago, I quickly realized the list could go on forever, but forever is a long time, and I had a few others things I wanted to do that day – most of them didn’t include sitting in front of my computer for hours upon hours.

Also, real quick – A big shout out to my haters, specifically the ones who have a problem with my language choices. I’m 24 years old, I watch a lot of Family Guy and I like to tell it how it is. I’m going to say a bad word if I want to.

So, here we go, we’ll another installment Ask Gunnar (honestly, if you have a better idea for this portion of my blog, please let me know, I am looking for a better title). I have to cut into these emails somehow.

The First Question comes from Lindsay. She saw my blog about dating (http://gunnaresiason.com/will-you-go-out-with-me) – you know the one with the picture of Paris Hilton and me? Anyways, Lindsay, who is almost 30, is post double-lung transplant and asks “I am almost 30 and had a serious boyfriend for 5 years but he left this past winter. I want to get back into the dating world but am nervous too for many reasons. As you know most CF patients have a complicated medical background. I met my first boyfriend at a bar and we met for dinner a week later. Here I told him everything on the first date – the CF, the double lung transplant, the diabetes. He stayed around for 5 years until he said it was too much. I guess I am wondering what you and/or others think about when to tell someone you are dating or going to be dating about [your case with CF].”

Well that guy sounds like a real asshole if you ask me. I think the major challenge that a lot of people with CF face is that finding a person in the significant other category can be a real challenge at times, because that person is going to have to be willing to make enormous sacrifices. It sounds like your ex-boyfriend was not that kind of guy. If you watch enough Dr. Phil (I don’t watch Dr. Phil at all), I am sure he will say that relationships are built around sacrifices and trust. Trusting someone is not easy and willing to make large changes in life may not be any easier. In my personal experience, I like to be upfront with the lucky girl that gets to go on a date with me. The nasty cough, tons of pills and appearance of my feeding tube are not the easiest things in the world to hide, so I just lay it all out there. I’ve seen people cower in fear when I’ve done that, but I have also seen people take a genuine interest in everything that goes on in my life. I think it’s really kind of a trial and error thing.

With that being said, your boy over here can’t seem to hang on to a winner for longer than a few months, so whatever I am doing may or may not be working. (We’re getting really deep here) I think the real challenge for me is that people kind of want to live the wild and crazy lifestyle of a New York City young-professional, or “Yo-Pro’s” as the kids say these days. Sadly, that’s just not in the cards for me. Finding a person who has the backbone to make significant scarifies and the emotional strength to deal with something as heavy as cystic fibrosis is not an easy task, but the only way to find out if that person is willing to try is by letting him, or her, in on the big secret.

>The next question comes directly from my last blog post, specifically the point about vaccinations. Linda, who is the aunt of a 10 year old with CF, asks, “Why are [vaccinations] important to you?”

I can only answer this question from my own experiences and what I have learned through conversations with other people who have CF. I was vaccinated as an infant and get the flu shot every year. I also got the Bird Flu shot while I was in college. I ain’t got no time for the Bird Flu, and neither do you. Seriously, though, if you want to know what real misery is, ask someone with CF what it’s like to have the flu also on top of the hideousness that is cystic fibrosis. Fortunately, I have never gone down that path (knock on wood), but I know a few who have and I don’t think I have the words to describe what that seems like.

While I was in college, I made sure my roommates were vaccinated as well. For example, while the flu shot protected them, I also felt a sense of relief that we were somewhat protected from the virus making an unwanted entry into our room. I have enough on my plate with CF, I give my immune system more than it can handle on a daily basis. I realize there may be a lot of negative talk about vaccines out there, but what can I say? They seem to help me. Science.

The third question comes from Tom in Boston. Tom’s connection to CF stems from meeting me at BC club hockey tryouts. I came across the middle to get a pass with my head down and he dropped me pretty hard. Needless to say, we both got cut from the team. We’ve been friends ever since and now he dates one of my best friends…. Anyway, his email asks, “What are your thoughts on deflate gate?”

It’s a sad time to be a Boston sports fan, isn’t it? The glory years of all the championships are coming to an end. The Red Sox are in crisis-mode, the Bruins are not going to be any good this year and the Pats are in trouble without their main man, Tom Brady, for four games. (I know nothing about the Celtics, or the NBA for that matter, but since they don’t have LeBron, I am willing to say their chances are slim.) Boston has had 9 championships from 2000-2015, most of any sports market in the major professional sports. Business Insider and my ability to count to 9 are my sources here. Business Insider actually chooses to include MLS championships and claims that the LA area has won the most major sports championships (14) because of the Galaxy, but come on, let’s get real here. Soccer is about as American as Freedom Fries are European. Get out of here with that nonsense. Soccer was fun to play when we were all five years old and learning how to run, beyond that it’s about as entertaining as watching paint dry.

That’s neither here nor there. Do I think TB12 is probably, maybe, just a little bit, perhaps guilty as that big investigation points out? Yeah, he and the Patriots cheated. Rules are rules and he, along with some help, circumvented them. You can’t deflate balls. I don’t care how big (or little) you like your balls. All the balls need to be a certain size and his balls weren’t that size, so tough luck. In reality, though, his biggest crime is his ability to write really long Facebook posts. No one likes seeing a novel of a Facebook status about the state of the world. Learn from Tom Brady’s mistakes and don’t be one of those people who write convoluted Facebook statuses that take forever to read, for the love of God!!!!!

With that being said, do I think Deflate Gate will really prevent him from going down in the history books as the best quarterback who has ever played? No, I don’t think it will. He’s an awesome player, his wife is a babe and he wins championships. What a life he has. This was just a little hiccup and after his four-game suspension, hopefully all will be back to normal in Foxboro. Maybe then we can move past it just like Mark McGuire’s steroid use, or…..

<The final question comes from Joey and Jessica, the parents of an 8-year-old boy with CF who is starting up tackle football in the fall. They ask, “What recommendations or suggestions do you have? We are concerned about germs from the mouthpiece.”

Well first off, awesome job by you guys for letting him get involved in sports at a young age, there’s nothing better for a young kid with CF than playing sports. Get those lungs pumping.

As for any recommendations I have, well let’s tackle that question about the mouthpiece first. Wash and rinse that thing every day. Just stick it in a little cup of Listerine or wash it with the rest of his Neb-T’s, that’s what I used to do. You should also throw his practice uniform in the laundry after practice as well. Really, just do your best to keep everything clean. There is an antimicrobial spray for pads that you can buy. I recently put that stuff on all my hockey gear. Who knows if it works, but I did it anyways. A Google search will yield an answer for you there.

You also have to make sure you clean any cuts he may get. Those don’t need to get infected, but beyond that just make sure he’s having fun and he’s committed to the team. Make him carry his own equipment to and from practice. That will pay dividends in the long run. I hated seeing my little hockey players this past winter walk into practice only to be followed by their parents carrying the big hockey bag. That will help teach discipline and respect for the sport. Enjoy the season, and good luck.

My top ten favorite movies of all time in no particular order:

All 6 installments of Star Wars


Comfort with you Feeding Tube

Success with the Feeding Tube