Cystic Fibrosis Around the World – Brazil 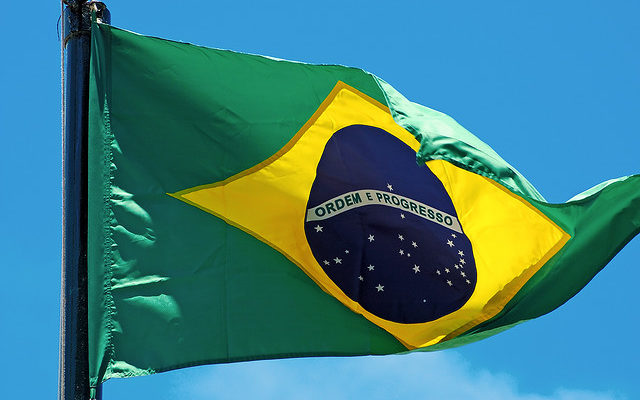 Cystic Fibrosis Around the World continues with a stop in Brazil. Today you’ll meet Verônica Stasiak Bednarczuk de Oliveira. She is 30 years old living with cystic fibrosis and a very important advocate for people living with CF in Brazil. I’d like to thank Verônica, her organization, Unidos pela Vida, and Cristiano Silveira (a CF parent from Rio de Janeiro, who is the president of ACAM a CF association in Rio) for helping to put this interview together as well as Pamela Mazini Stürmer for translating (I am yet to master Portuguese)!

It is rare for people to have heard about Cystic Fibrosis, including those in the medical community in Brazil.

I was diagnosed when I was 23. I’ve had all symptoms throughout my life and until I was 23, I’ve had had 2 parts of my lungs extracted, a tumor caused by a fungus in the remaining part of the same lung, among other things. When I was hospitalized because part of my pancreas was becoming necrotic, I met a doctor who suspected I had Cystic Fibrosis, this was when I did the test and learn I had CF.

Before the diagnosis, during that same hospitalization I dreamed I founded a group to assist people with respiratory problems. In this dream, I was under a tree, in a beautiful green field, and I was talking to people around me about the importance we should give to the air we breathe and how unfortunate it is that we only value it after we depend on a machine to breathe. When I woke up, I wrote the dream down and was determined to start a project to bring people with respiratory problems together in order to understand what we could do to improve the quality of our lives.

After the diagnosis, I began to study what CF was, and noticed that all health problems I’ve had until then could have been avoided if I had received proper diagnosis and treatment. At the time I could only think of how many people were and still are suffering like I was.

Combining my dream, background in the Psychology field, work experience, and late diagnosis I decided to found, in October of 2009, the “United for Life Group“.

Approximately two years later, in November 2011, we held our Constituent Assembly and officially founded the United for Life Institute, thanks to the unconditional trust and support of incredible people: the Bernhoeft Family and the Generation Transition and History Living Institute of Brazil.

So yes, I was encouraged to talk about CF because I did not want to die with that information for myself. There are other people in Brazil who have CF but do not know they have it and I believe it is my duty, since I have this information, to let other people know what it is so they too can get proper diagnosis. In Brazil, medications are available through the Sistema Único de Saúde known as SUS (in English the “Unified Health System”) which is publicly funded health system that is entirely free of any cost, for any person, including foreigners. Some CF medications are part of a protocol of medications that have been approved by SUS, and the patients can [get] them at any public pharmacy. CF Clinic Care is performed in public hospitals, in which each state has a CF reference center. There is still much to be improved in terms of diagnosis, medication and treatment in Brazil, for example, we do not yet have the approval of Anvisa (what we call “Brazil’s FDA” if we may compare) for new therapies such as Ivacaftor and Lumacaftor.

Currently in Brazil there are no clinical trials for CFTR protein modulators or other CF medications. To date, we (the Institute United for Life) still do not have access to the new medications by SUS, only very few patients have obtained them by court order. At the moment, we have information that the pharmaceutical industry that develops drugs like Orkambi and Kalydeco is already in Brazil, and according to its information, they are developing all the necessary documentation to send to the regulatory body (ANVISA). But, unfortunately, this process is slow and there is no prospect of being incorporated and distributed yet.

Today, I receive care from pulmonologist specialized in Adult Care. In theory, each state should have a CF reference center within a hospital (usually a university hospital), where the multidisciplinary team cares for people with Cystic Fibrosis.

In Curitiba, where I live, there are two hospitals that have an outpatient clinic for children with Cystic Fibrosis – Hospital Pequeno Príncipe (HPP) and Hospital de Clínicas. At HPP, only children under the age of 18 are taken care of. In the Hospital de Clínicas, which is the Hospital of the Federal University of Paraná, there is both a children and an adult outpatient clinic, which is coordinated by a pulmonologist. Unfortunately, both clinics in this hospital are located in the same physical space, and in addition, the adult team needs more adult professionals.

I have a private health plan, so I go to a hospital near my house in emergency situations, and I get my medications from the Public Health System (SUS). However, if one does not have a private health insurance (which you can [buy] individually, or if you work for a company, it will probably give you health insurance as a benefit), you will use the SUS for emergencies. Each city has several Unidade Básica de Saúde or UBS (in English a Basic Health Unit, in Brazil it would be a small clinic of care), which is the first contact of the population with SUS. The UBSs patients receive care by appointment, that is, there is no emergency aid. In these more serious and emergency cases, the patient must seek a UPA (Emergency Care Unit) or the nearest hospital. People with Cystic Fibrosis usually go directly to hospitals that have a CF Reference Center (which I must say only exist in few cities in Brazil), or consult their doctors for guidance.

In theory, people with CF who need oral medication are hospitalized or, depending on their condition, can get home care. In my case, when I do intravenous corticosteroids or antibiotics I am hospitalized, but I have already been hospitalized for a month at home.

I know of few people in Brazil who wear the Vest as an alternative to physical therapy for Cystic Fibrosis. It is not distributed freely by the government, and in Brazil it is quite expensive (around 20,000 BRL or almost 6,000 USD). I tested it once and I liked it, but I do not have it. I do my physical therapy daily with the EPAP mask and the Shaker, in addition to clearing exercises.

Today yes, but throughout my life I wasn’t. While in school I was the only kid who couldn’t do all exercises and had shortness of breath so my Physical Education teachers would let me sit down on the benches and watch classes. Today, I am married and want to have kids, it is actually a dream of mine, and I decided that I needed to take care of myself, that is why I started doing Crossfit and it’s been amazing! I started on November 2016 and after only 6 months doing it, I’ve increased my pulmonary function from 54% to 76%!

In Brazil, there are no new therapies being developed. There are no clinical studies for CF in Brazil, however, in UNICAMP (State University of Campinas) there is a group that, in partnership with European groups, tests on animal molecules with therapeutic potential.

I do not have a feeding tube. I have partial pancreatic insufficiency, and at the moment I do not use enzymes. I do not have CFRD, however, I have a balanced diet not to lose weight and to keep my immunity strengthened.

My biggest wish is that all people with Cystic Fibrosis in Brazil can be treated with the best physiotherapy techniques and new medicines, so they can live well and for a long time! I would like things to happen faster (approval of new technologies, for example), and that money for health will be used in an appropriate way.

I did not have a lung transplant, but I know people who have already done it and are living very well. Unfortunately, some CFers I personally know did not react well to surgery and had serious complications, others unfortunately died.

In addition, there are only three hospitals that perform lung transplant in Brazil (Fortaleza, São Paulo and Porto Alegre). In Porto Alegre (South of the country), we had the first case outside the United States to perform interlife lung transplant.

I think it’s an incredible alternative that can improve the quality of life for those who need a new organ!

I am a graduated Psychologist and at the time I went to college I still did not have the diagnosis.

Brazil does not have a CF Foundation. However, even though Institute United For Life is not a Foundation, but a non-profit organization, it is reference in Brazil for its education, communication, incentive to physical education and organizational support programs. United for life provides every day life information, support to families, education to health professionals and tries to as much as possible to make CF well known in Brazil.

In addition, United for Life serves as glue to all associations that focus on Cystic Fibrosis all over Brazil. These associations represent CF patients in all states of Brazil.

Yes, every September the Institute United for Life organizes the CF Awareness Month in Brazil, since September 8th is Worldwide CF Day, which was when the gene responsible for CF was discovered. In 2017 the Institute developed a new campaign called “Signs that matter” in which it motivates people to pay attention to notifications not on our phones, but in our bodies, in order to have people themselves pay attention for the symptoms of cystic fibrosis and search for a diagnosis.

While reaching out to other associations in the world, asking them to post the “Signs that matter” video, the Institute received a lot of feedback from developed countries, such as US, Australia and some European countries arguing that the late diagnosis (or diagnosis for adults) was not the biggest priority/problem in these countries, since neonatal screening was basically mandatory for all of those countries. This was something that we did not hear from associations in Africa, Asia and South America! We thought that that was an interesting feedback!