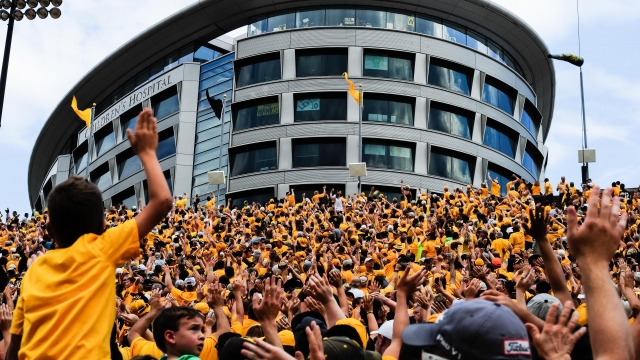 If you’re a college football fan then you know about the newest tradition that is taking over the University of Iowa’s football program during home games.

If not… let me tell you about it.

Perhaps the most brilliant person in the history of mankind decided that the University of Iowa Stead Family Children’s Hospital would be built overlooking the university’s football stadium.

As a result, the stadium’s 70,000 fans aren’t the only ones watching home games.

Patients and families can also watch Hawkeye games from the top floors of the hospital complete with a children’s hospital “tailgate.” It’s really amazing.

Taking things a step further, all 70,000+ fans and the athletes (from both teams) wave at the hospital at the end of the first quarter.

Source – What started as a fan suggestion on an Iowa Facebook fan page has turned into a full-blown movement: Iowa fans collectively waving to the top floor of the hospital, where the children and their families gather to watch Iowa, at the end of the first quarter during Hawkeye home games.

Here’s a video of the new tradition in action:

Thousands fans, players and coaches at Kinnick Stadium stand up and wave to patients in the University of Iowa Children's Hospital. pic.twitter.com/qoYsbwaZ4Q

Honestly… the person who decided that a children’s hospital should be overlooking a football stadium deserves a Goddamn Noble Prize.

Consider this blog an official nomination.

Seriously, though… what’s better than this? Not a single kid anywhere in the world wants to be in a hospital bed, but the hospital wave tradition allows kids, and their families, a moment, albeit a brief moment, of escape from reality.

I think this proves why sports are amazing for everyone. This is in the same category of “awesome” as the simulated plays during high school football games when players on both teams include kids who are dealing with chronic illness. In fact I experienced a few moments of sports euphoria when I was in high school, so I know exactly how these kids are feeling. 2009 – prior to the first play of the Empire Challenge high school all-star game, players from the opposing team’s defense went “offsides” and hugged me one-by-one. Photo by David Pokress

I use athletics, ice hockey, football or whatever, as an escape from CF. I’ve done it my whole life.

But when you’re sitting in a hospital bed being denied the one thing that gives you an escape, it makes the whole experience that much worse. Personally I can’t bear the thought of being in the hospital on a Sunday during football season and having to miss a Packer game. It’s happened, and I hate it.

People in college football-heavy states feel the same way about their beloved college teams. That’s why this is great. It allows the patients to have some semblance of normalcy during an incredibly difficult and stressful time.

The Hawkeyes have this right… and as you’ll see in this ESPN story, this new tradition is more meaningful to the kids in the children’s hospital than you or I could ever imagine… keep a box of tissues handy.


Cystic Fibrosis Life Expectancy Just Took a Huge Step Forward, What Does that Mean For You?