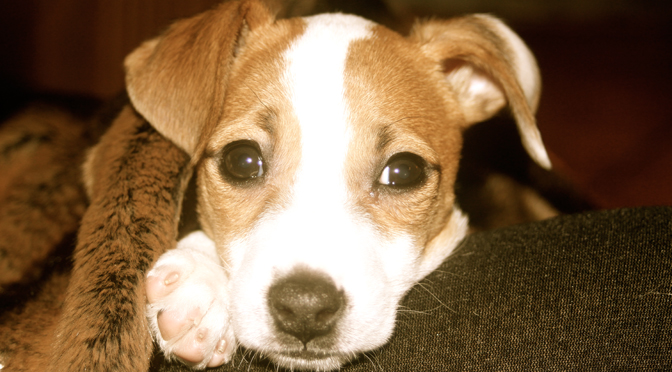 I hope y’all had a great President’s Weekend. I know I did. We finally had subzero temps in New York, so I had the
chance to get on the pond with all my buddies… there’s really nothing better than buzzing around a giant frozen pond. Here’s a pic…

I’ll probably be sick for a week because of this experience, but sometimes it’s all worth it.

So, what I want to talk about (as if the title didn’t allude to it) are my dogs. I wholeheartedly believe that dogs are an incredible asset in the fight against cystic fibrosis, or any chronic illness for that matter. They show unconditional love, comfort and all around friendliness. They hang through the thick and thin, and just when things seem like they might be going bad, they are right there to remind us that we aren’t alone.

If you were to tell me that you don’t love the face of a little puppy, I’d call you a communist. I am a dog lover for sure. Really, just an animal lover in general – except for insects. I have no problem Rambo-ing the shit out of a bug if it gets all up in my business. I am not looking for a Zika exposure over here in New York.

BUT as for dogs, I love them. My parents have always had “the family dog.” When I was born they were already living with two Newfoundland’s, Charlie and Raider. They were giant, and you betchya, my parents used to saddle them up so infant Gunnar could ride around the house in Kentucky – or at least that’s what I have been told, anyway. In my lifetime we’ve had three other family dogs, Buckley, Billie and Beanie. Whereas some families do that weird thing where they name all the kids with the same starting letter, we do that with our dogs. Buckley and Beanie are Jack Russell’s – Buck is 19 and a half, while Beaner is three and a half – and Billster, a Vizsla, was 16 when she passed away a little over a year ago.

Somehow my mom has developed a skill that allows our dogs to live very comfortably beyond their life expectancy. Buckley is nearly deaf and blind in her old age, but as soon as the food comes out of the cabinet, she looks like Bo Jackson running across the kitchen. Who knows what my mom feeds them. I do have a sneaky suspicion they take more daily supplements than I do – a pretty impressive feat.

Dogs are great because no matter what kind of mood I am in they are always ready to party. All I have to do is walk inside the house and it’s like the greatest day on earth in their minds, Beanie especially. Whether I’m gone for an hour or a week, I’m always greeted the same way, with the most fantastic outpouring of love imaginable.

Are our dogs aware that I am sick? I think so.

They may not know what CF is, but for as long as we have had a dog in the family, I’ve always had a buddy with me during my treatments. As I started to get older and more independent with my treatments, at least one of the dogs would sniff me out and sit with me for the entire session. It’s almost like the dogs passed off the responsibility to each other with age. Now that Buckley is a little older her life doesn’t stray too far from her crate, but Beanie is all over me every morning and night. Billie was the same way too. Beanie actually just sits on me, making some of the process a little more difficult than it should be, but she’s a welcome obstacle. A story that I always like to tell has to do with Billie. She was a great dog. As she aged, she was diagnosed with Cushing’s disease and was covered with tumors and fatty deposits. Eventually movement and general day-to-day activity became really tough and excruciatingly painful for her. Despite all that, her personality never changed.

It came down to crunch time with Billie and we had to make a decision about whether or not the vet should go in and do his best to drain several of Billie’s tumors so that Billie wouldn’t struggle with everyday life, or if we should let her live out the rest of her days with some peace for a few weeks and avoid the procedure all together. The risk involved had to do with the sedative – it was unclear how Billie would respond. Billie made the decision for us. The happy-go-lucky grin on her face told us she wasn’t ready to go to the big dog park in the sky. Selfishly, we too wanted her around for as long as we could have her.

The procedure went ahead as planned and was a success. Billie came through the sedative and many of her tumors, including a major infection on her tail, had been drained. Unfortunately, there was an unforeseen consequence.

Billie had to remain in recovery for a few days because she couldn’t snap out of it right away. By the time she was ready to leave, her arthritic hips and joints in her hind legs had basically shut down. For the lack of a better term, we thought she had lost the ability to walk.

Now, talk about a roller coaster of emotions. Billie came through the hardest part just fine. I think we were all prepared for an outcome where Billie wouldn’t be coming home from the vet. Against all odds, she fought herself through, only seemingly to lose the ability to walk. It was devastating.

We brought Billie home from the vet to be in a familiar place surrounded by love and her two little buddies, Buckley and Beanie. At this point, Beanie was still very much a puppy, only about a year and a half old. She respected Billie’s condition and immediately calmed down. Fast forward a few days and Billie really hadn’t moved too much from where she laid down when she returned home from the vet – helping her to get up and eat, drink water or go to the bathroom was a pretty significant struggle.

It was maybe 10:30 two or three days after Billie came home when I started up my evening treatments for the day. I was just kind of sitting in the TV room by myself with Beanie in her customary spot, on my lap. The rattle of the nebulizer monotonously droned on while I watched nothing exciting on TV. I heard a very faint thump thump thump.

I didn’t really think anything of it.

As the first neb ended, I connected the second treatment to the nebulizer and strapped on the vest. To combat the sound of the machines I turned up the volume on the TV. I was just sitting there minding my own business when all of a sudden Billie walked by.

It was such a common occurrence that I didn’t think twice. “Oh hey Bill,” I said as if she could understand what I was saying. She then did her customary lap around the room then lay down next to my chair (she had already lost the ability to jump about a year prior).

Then I thought to myself, “What the f*ck!?” as my eyes got really huge. Again, I started talking to Billie as if she could understand me, “What are you doing… how did you get in here?” She did that thing where dogs sort of just tilt their heads and then proceeded to look at me.

I popped out of the seat to find my mom. We came running back into the room to find Billie standing as if she was really confused about what was going on. Beanie was going crazy, and poor Buckley who can’t see shit started barking because Beanie was going nuts. Then Billie barked, and we hadn’t heard her bark in like a month. It was total chaos, the TV was super loud, my nebulizer was still running after I had forgotten to shut it off when I went to find my mom and the dogs were trying to recreate just about every scene from Jumanji.

Finally everything settled down. It turns out all Billie wanted to do was just hang out with me while I did my meds. So that’s what we did just about every night for the next nine months until she finally strolled through the pearly gates.

15 Reasons Why I Never Hide My CF